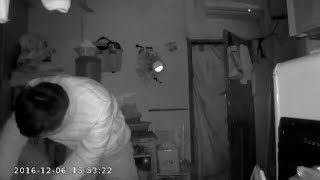 A GENTLEMAN ON THE BEAM 梁上君子

Wei Chengcheng 武淑清, is a worker-operator at Bernard Controls China and a practicing artist since 2016, after having actively engaged in the activities of the Social Sensibility R&D Department since 2011. He recently created this artwork, charged with powerful actual and symbolic meaning and embedded in a territory he chose to explore where art and personal daily life merge at once, brutally and poetically. After having noticed the disappearance of money and items from his flat and having the feeling that a thief was breaking in (while he and his wife were not there), and cautiously stealing little amounts day after day, Chengcheng (in his words inspired by the discovery of art and art practice) decided to discuss with the department's artists, (Alessandro Rolandi and Tianji Zhao), the possibility to use this situation to create an artwork. He asked to purchase and install a hidden security camera and connected it to his mobile phone to film the intruder and catch him on the spot. When the situation became real and he saw him, on the screen of his phone, entering the flat and operating so carefully, he recalls how he developed a strange empathy and complicity with the thief, observing his very skillful and subtle behaviour, his attitude and the rhythm of his gestures. Chengcheng explains how --looking at the thief in action-- he perceived a powerful mix of beauty, survival instinct and necessity of which, he believes, life itself is made. He then says that the idea to make art out of this dramatic moment gave him the capacity to accept it, despite the personal damage involved. At one point he tried to speak to the thief, through the surveillance camera, not to scare or threaten him, but to ask if he would like to have tea and a chat. The thief got scared and ran away. Mr. Chengcheng conceived the video in two different ways: 1)as a unique piece and 2)as a sequence of 8 different very short moments. His choice to transform such a traumatic and emotionally dangerous situation into an opportunity to create an artwork is a unique, powerful and transformative act. Developing a totally counter-intuitive understanding and reaction towards an abuse received, Chengcheng consciously chooses to be more interested in the intruder/other and his condition, rather than being angry at him even if he represents a real threat to his limited income and personal privacy. Somehow, the fact to be able to process the situation through conceptual art language, provides him a chance to go beyond the legitimate feelings of rage, and revenge and to re-contextualize the event as a brilliant, humourous and dark critique to the socio-economic system which creates the conditions to steal from each other. Chengcheng achieves something Charlie Chaplin could have imagined for a tragi-comic sketch, in a much more radical and direct way. By choosing to witness a problematic event, in real time, and deal with it in a way which is antithetic and, therefore, both compassionate and emancipatory, he succeeds to merge art and life in the very moment, without being self-indulgent or naive and challenging the status quo to come to terms with its own contradictions. This artwork has been displayed in CACHE Space in 798 area in Beijing in February 2017.

a gentleman on the beam
None
Next